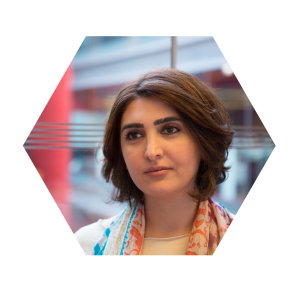 Najlaa Aboumerhi has ben a journalist for more than 18 years. She has worked for various media outlets in Beirut and London and has a wide and diverse experience in print journalism, and audiovisual media. She is a senior journalist and broadcaster, and holds a BA in print journalism from the Faculty of Mass Communication at the Lebanese University, and an MA in Middle Eastern Studies from King's College London. She moved to London in 2007, where she worked for BBC Arabic for 10 years, before joining Al-Araby TV. Throughout her career, Aboumerhi has covered the Battle of Nahr Al-Bared and the July War, the Afghan elections, October 17, and the U.S. elections. Aboumerhi wrote, corresponded, prepared and produced numerous documentaries, edited and supervised talk shows and was involved in the editing and production process. She voluntarily puts her journalism experience at the disposal of The Marie Colvin Female Journalists' Network.