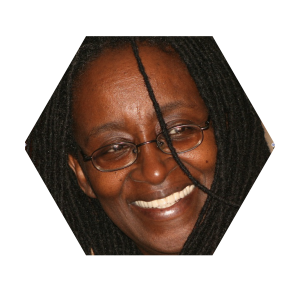 "Catherine Gicheru is an International Center for Journalists (ICFJ) Knight Fellow currently spearheading a project that drives coverage of underreported gender, health and development issues affecting marginalized groups. That initiative, the Africa Women Journalism Project (AWJP)​, also works to strengthening the voices of women journalists by helping them to become innovators in their newsrooms. Gicheru leads a team of journalists, mentors and data analysts in five African countries (Ghana, Kenya, Nigeria, Tanzania and Uganda) who are producing smart, data-based storytelling with a special focus on COVID-19. A veteran journalist with two of the leading media organisations in the region – she was the first woman bureau chief, the first female news editor of the Nation Media Group and was the founding editor of the dally newspaper the ​Star​. She co-founded East Africa’s first budget and public finance fact checking and verification initiative, ​PesaCheck.​ She is an advisory board member of the Reuters Institute for the Study of Journalism Oxford; the Aga Khan University’s Graduate School of Media and Communications; the British Council’s First News Worldwide program and advised on Open Society’s Fiscal Governance Program and the ICFJ’s State of Technology in Global Newsrooms survey. She is a jury member for WAN-IFRA Africa Digital Media Awards, EJC’s MoneyTrail among others. Gicheru is a Nieman Fellow at Harvard University, a Reuters Institute Journalism Fellow at Oxford University, and a 1992 IWMF Courage in Journalism award winner."