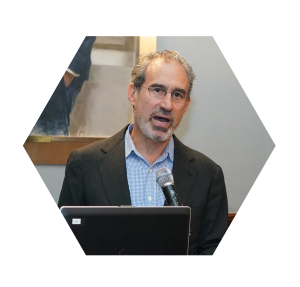 "Alexander Papachristou joined the Vance Center as Executive Director in January 2012. He directs the organization’s overall operations and focuses on its programmatic and institutional initiatives, as well as fundraising. Mr. Papachristou previously was president of the Near East Foundation, a participatory, community-based economic and social development organization working in Arab and African countries. For the preceding 18 years, Mr. Papachristou engaged in cross-border corporate finance in advisory and proprietary roles: he served as managing director and general counsel at NCH Capital, Inc, which invests in the former Soviet Union and Eastern Europe; he lived in Russia from 1989 to 1993, where he opened and ran the Moscow office of White & Case. Mr. Papachristou also worked in the law firm of Clifford & Warnke in Washington, DC and was policy assistant to New York Governor Mario Cuomo. He served as law clerk to US District Judge Myron H. Thompson in the Middle District of Alabama. Mr. Papachristou is a member of the board of the International Consortium of Investigative Journalists, as well as the advisory council of Bard College’s Center for Civic Engagement. In late 2011, The New Press published Blind Goddess: A Race and Justice Reader, which Mr. Papachristou edited. Mr. Papachristou received an LLM and JD from Harvard Law School and an AB from Princeton University, as well as Arabic language training at the American University in Cairo.