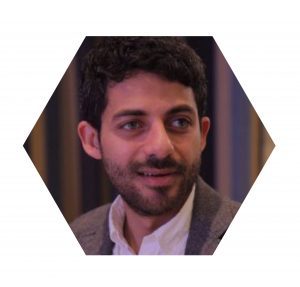 "Ragab - as called by friends and colleagues - is an accomplished Egyptian journalist, television producer, and investigative reporter with a significant career that dates back to 2008, during which he conducted numerous investigative reports and had a leading role in reshaping and developing Al Masry Al Youm's - the largest independent daily newspaper in Egypt - online content. He also played a major part as a producer in some of the most popular Egyptian satellite daily talk shows, including On TV’s “Akher Kalam” with anchor Yousri Fouda. Now Ragab is focused on managing the content of “the 5th estate”; Deutsche Welle Arabia's digital media platform which he cofounded in 2018. Pursuing a career in journalism, Ragab first joined Al Masry Al Youm in 2006 as a Political Editor and soon developed the needed skills to start conducting investigative reports and stories. Later in 2011 he was awarded with Arab Reporters for Investigative Journalism’s Arab Spring Award for Best Investigation in the Arab World. At the age of 29, Ragab became Head of Investigations Department at Al Masry Al Youm. Two years later he was promoted to Managing Editor of its Digital Platform, during which he invested in developing and reshaping the website’s content leading to creating two sub-platforms known as “Sharek” – a website dedicated to citizen journalism – and “Almasry- lite” – a humanitarian and feature stories focused website. After, Ragab took a different path that led him to Deutsche Welle Arabic’s Headquarters in Berlin, Germany. There he started a new chapter as he co-founded “the 5th estate”,a TV show hosted by Yousri Fouda in 2016. He worked as the show’s Executive Producer until 2018. Again, answering the sacred call of the digital age, Ragab proceeded in founding a digital media platform also known by the name “the 5th estate”, that specializes in producing and publishing stories and reports concerning pressing political and social topics around the world and the Arab world with deepened approach.